It's our great pleasure to provide the final Toreador spoiler for the new Fifth Edition boxed set.  Without further ado, let's meet Catalina Vega with artwork by Mitch Mueller.

Catalina Vega is a great vampire, who will become the cornerstone of many future Toreador decks. She has all of the Toreador clan disciplines at superior, a Prince title, +1 bleed, and inferior Fortitude. 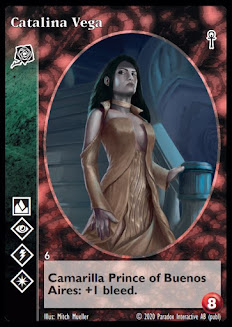 The Fifth Edition boxed set returned to first principles with each clan deck.  The Malkavians will be fearsome bleeders.  The Tremere will be versatile, hard-to-oust, and opportunistic on offense.  The Nosferatu will excel in combat and defensive permanents, ousting via slogging attrition.  The Ventrue will bleed and vote and bounce.

Like the rest, the Toreador deck relies on what the clan was good at in 1994: political power with a hint of bleed offense.  This is not too dissimilar from the Ventrue.  The deck itself is an interesting build when compared to the other starters in the Fifth Edition boxed set.  This is the only deck with dual-discipline cards (Scalpel Tongue) and with dual-use cards (Resists Earth's Grasp and Scalpel Tongue).  It is also the only deck to focus on two disciplines while the other decks focus on three.  Especially, for newer players, this will be the deck that is the hardest to play (having unique concepts) and it will be the hardest to master.

The lack of Auspex in the deck is understandable given that Toreador vote builds mainly use Auspex mainly for bounce.  Since Catalina Vega is the only vampire in the deck to have superior Auspex and some vampires are missing the discipline altogether, its absence makes sense.  What is in the deck is a solid line of superior Presence and a decent amount of superior Celerity.  That is the makings of a solid cel-gun deck with Prince support for Second Tradition defense.  (Perhaps an idea that we'll explore in a future Let's Build.)

As previously mentioned, Black Chantry focused on building solid, basic decks for beginners. The decks also boast collection of new vampires and some library cards.  For established players, BCP included many important reprints, helping to expand the collection of cards that are "in print."

Let's take a quick look at the deck that Black Chantry is providing us.

Analysis: What's missing? What could be better?

Overall this is a solid foundation.  Villein back the cost of your vampires, bring out more, do it again.  Vote, fill them up with Voter Captivation.  (Potentially Villein again?)

With Con Boons and a large number of Princes, 2-3 Third Traditions would be really useful.  They would also help with Toreador Grand Ball, giving you a chump to host the party.  Vote decks should also have a way to battle weenies and ally decks.  Anarchist Uprising and Ancilla Empowerment (or if we added Third Traditions to this deck, Domain Challenge) would ameliorate such threats.

With the lack of reactions, it may be hard to save them or have them for blocking specific actions.  Sometimes you just need to survive.  If you have the opportunity the most important thing to block is permanent intercept.  Dedicated blocking decks will present a problem, so timing actions to await weaknesses, feinting, and ordering actions to draw out blocks will help you be successful.  (Though this deck may need a few more Majesty or Change of Target to make feints prove successful.)

Of course, Toreador Grand Ball will ensure that an action is successful, but you may be unable to defend it, so carefully choose when to play them to ensure maximum effect.  The Toreador Grand Ball should set up or obtain an oust or provide significant pool gain to consider playing it.  If you're not in that position holding it may be the wiser move.

In addition to giving us five well-rounded crypts of vampires, BCP's design for the Fifth Edition set includes some very interesting out-of-clan discipline concentrations.  The Malkavians have a line of Presence (expect some additional vote goodies once everyone is done rebuilding Malk '94 with the new crypt).  The Nosferatu continue to include a lot of Auspex, allowing for varied, transient intercept packages.  For the Toreador, the most common out-of-clan is Fortitude.  This grants Toreador two things that they have historically lacked: damage prevention and multi-action.

We're going to focus on the latter as we build a new deck along old lines.

As previously mentioned, the Toreador and Ventrue decks share a lot of overlap.  In fact the clans can both bleed well and vote well.  They have access to bounce via Dominate or superior Auspex.  The Ventrue have the ability to multi-act via Freak Drive and the Toreador do not.  Toreador designs typically "mutli-act" via Majesty, locking blockers until they take one successful action and then it's done.  There is little ability to overwhelm your prey by having the same vampire take more than one successful action.  This is the fundamental difference between classic Ventrue Law Firm builds and Toreador vote builds.  We can now reduce those differences and build a Law-Firm-style Toreador deck because of our access to Fortitude in the new grouping.

So, let's take a quick review of what the Ventrue Law Firm deck is.  VEKN has a great interview with Tiago Brum and Darby Keeney discussing the deck type.  Let's highlight a few comments from that interview:

Lawfirm decks are a subset of multi-action bleed/vote designs. When the phrase was coined, the Ventrue monopolized that niche – but do no longer. I believe that the entire class remains highly competitive, with a slight edge to the stealth-enabled variants.-- Darby Keeney

+1 intercept stops Ventrues....You need to act in bursts of multi-action with Majesties and Freak Drives, because you need your actions to go through in order to build up, or impact the table. --Tiago Brum

The original Fifth Edition deck uses Toreador Grand Ball to ensure that an action is successful.  You may not be able to defend it.  In the deck provided, you probably cannot.  In terms of helping you oust, Toreador Grand Ball allows you to get to the referendum of a political action.  You still need the vote to pass.  Even so, you're probably doing 3 pool damage (Kine Resource Contested) or 1 per minion (Anarchist Uprising).  Furthermore, if you could take another action, is there something that would help you oust your prey?  You could steal allies with Entrancement, equip, recruit your own allies, etc.  None of those things, however, damages your prey's pool.

So, we're trading guaranteed success from Toreador Grand Ball for multi-action bleed/vote that attempts to overwhelm preys.  Is this a bad proposition?  Not entirely, Ventrue Law Firm decks are successful; it's a design that works.  In fact, it may work better for Toreador that can multi-act. Why? Aching Beauty.

Aching Beauty decks attempt to discourage or punish blockers by costing them pool for successful blocks.  Like other Toreador decks these suffer from the problem that Toreador can take only one successful action per turn.  We can turn the Law-Firm archetype's weakness into a strength, by making blocks costly, and turn the Aching-Beauty archetype's weakness into a strength, by punishing your prey with additional, successful actions from the same vampire.

So, I've named this deck type the Toreador Talent Agency as homage to the original Ventrue Law Firm concept (let's face it Toreadors are not lawyers) and the use of Aching Beauty.  As with all of our Let's Build decks, this decklist will only feature cards available from Black Chantry.  Special note that this deck is completely untested (though excellent feedback was provided by Darby Keeney).  Please share any experiences that you have with it or changes that you make; feedback is welcomed.

Analysis: What's missing? What could be better?

The crypt is rather solid.  Chelsea Blake from the Ventrue deck could find a place here, but seems a little expensive for a 5-cap with no superior discipline amongst the ones we're using.  The addition of Leumeah is great, giving us essentially two identical 6-caps.  However, because Leumeah is a Brujah Anarch, she should never be the first vampire influenced unless you have no other choice.

Anne-Marie Bourgeois, Inconnu Recruiter should replace the second Tyler.  In fact, she had until I realized that she's only available in the Berlin Anthology and not in Anthology 1.  Let's Build decks are limited to BCP cards, so I had to swap her out.

This style of deck usually includes Mind Numb and First Tradition, neither of which are in the BCP card pool.  The small reaction package is not nearly as efficient as a Law Firm, which can run 4x Deflection instead.  It may simply be more worthwhile to remove the reactions altogether or focus only on Second Tradition.  Or just remove them completely and focus on bloating.  If we make the latter choice, then Tyler McGill is less useful than Nik Sikko.

Andre LeRoux is hard to pass up because he can use his special text on his own bleeds, giving you a 3-cap that can bleed for 2.  He's also very like to contest.  Any other unique 2-4 capacity Toreador is a fine replacement if you find that you're contesting him too much.

Carlton van Wyk is useful in just about any deck, but with our reliance on a tiny reaction package, he's  formidable asset to add.  He's also something that you may wish to contest, since +1 intercept can be very damaging to this deck unless you have Aching Beauty running.  The deck is also somewhat bloodthirsty, which is the reason for so many Voter Captivation.  A Jake Washington or The Coven are a solid choices for giving you access to more blood if the deck is running dry.

What else can we do with Toreador with Fortitude?

These are not the first Toreador with Fortitude.  Previous groupings have splashed the occasional discipline point into Fortitude, but until now, we've not had so many in a useful chain.  This means that we can focus more on using the Fortitude that we could with previous groupings.
Although we eschewed the idea of multi-action with the Toreador Grand Ball, some good concepts exist in that space.  Most notably, some type of breed concept would be useful.  Drop an Embrace and a Third Tradition, then follow up with a Con Boon to bloat and regain blood via Voter Captivation.
Guns.  Toreador loves guns.  Since Jyhad, Toreador Celerity-gun decks have been a staple design.  With the group 5/6 vampires the focus shifts from reaction to action.  The lack of superior Auspex suggests offensive designs are more appropriate.  Nose of the Hound or perhaps Fleetness to ensure that you get the target you're looking for.  Defense can be back-rushing or running 6-8 copies of Second Tradition.
If you come up with some additional ideas, let us know.  There will be a lot of new options to explore with these vampires.

August 18, 2020
I wanted no land – I didn’t like that Magic had about 40% boring resource cards in the deck. -- Richard Garfield   And so, VTES players have a different problem, we have two decks to optimize.  So, let's tackle common crypt construction issues and ideas.
1 comment
Read more