August 27, 2022
This series will review the new cards in the upcoming Fall of London set. Today, we'll go over the new Brujah. 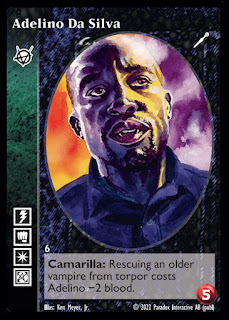 If this guy were an Anarch...

A mid-cap with no superior disciplines, having all in-clans and .  His ability to wow you is severely limited by his lack of superiors.  Quickness becoming free in the latest release, does give him some mainstream combat abilities and, of course, he can always fire off a bleed for 3 or more.  Still, he's a little expensive for a grocery-getter.  His could help in some designs that want equipment, giving you access to Magic of the Smith.  His discipline set would be much improved by becoming Anarch with access to Line Brawl and Dust Up.  His offers real benefit there, allowing you to put CrimethInc. into play.

His rescue special is rather interesting.  He can rescue older vampires for free.  Useful if your combat vampire takes a misstep or if you need to bring up your prey's famous vampire for another Fame-dunk.  Not something that you're likely to build around, but something that will definitely be useful.

The problem with Adelino is, given his discipline spread, he fits better with his Anarch brethren than with the Camarilla ones.  So, do you try to bolt him onto an Anarch deck?  You have the possibility of ordering issues, drawing Anarch cards that you cannot play.  How do you make him Anarch?  Anything beyond the cardless action and Twilight Camp likely dilutes the deck too much.
If you leave him in the Camarilla, his discipline set means he's coming out third and for that price maybe he's not worth it?  I do think his special helps in combat-oriented decks and is worth the extra pool over Paul Calderone.  Steps will need to be taken to ensure that he's not a liability. 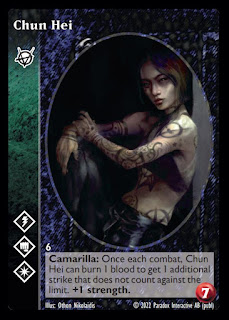 Welcome to the +strength party.

All of the clan disciplines at superior.  What else could you ask for?  Only the third (or fourth, see below) vampire with in group 6.

Do you like combat? Not only does Chun Hei have +1 strength, she has another combat special too.  The ability to gain an unlimited, additional strike once per combat means that in a default combat with no cards played, you can hit for 4 while losing only 2 blood.  With her ability to play all of the Celerity and Potence combat cards at superior the amount she can dish out is much higher.

Chun Hei is Camarilla, which gives group 5/6 Camarilla another solid mid-cap vampire.  Her lack of title makes it harder to work her into votes decks.  Not being an Anarch by default means that she will be unable to use Dust Up out of the box.  I'm not sure that making her Anarch is worth the trouble.
Her +1 strength and discipline spread works nicely with Theo Bell and Gwenllian (see below).  A mixed-sect deck that focuses on standard combat cards featuring 7-, 8-, and 9-caps could work nicely.  There are probably several approaches to this concept.  I look forward to seeing more of these decks.  (OK, probably not, since I sometimes just avoid combat, but still good combat decks are good for the game.) 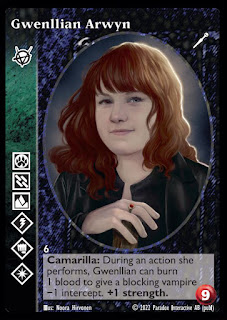 In addition to all in-clans at superior, we get two very useful inferiors and one more inferior no one is going to bother with.  The is going to do what you expect it to do: add bounce.  Since she already has , the bleed effects are less useful.  While the Anarchs have access to bounce with Bait and Switch, the Camarilla Brujah don't.  So this splash can help prevent the need to constantly back-rush.  Hitback can be a real problem for Brujah in general, so splashed can keep Gwenllian alive with Skin of Steel.  More importantly, she gains access to multi-action with Forced March and Freak Drive.  As for , I'm not sure what she'll use it for.  You can't really complain about the mostly useless though, the rest of her discipline spread is so good.

As I mentioned above, Gwenllian Arwyn has +1 strength.  This gives us another quality vampire with +1 strength. Her other special helps make her actions succeed, which combines nicely with her for a better chance at multi-acting.

This Brujah grouping is begging for a combat build to take advantage of the +strength.  Combined with Theo Bell's rush and , you've got two potential stars for the deck, that give you the tools (bounce) to avoid backrushing.
Beyond combat, Gwenllian gives you another multi-acting Brujah.  The lack of title is a bummer in that regard, but she could easily work with the Fortitude Toreadors or be a companion for Dmitra.  In the former case, a Brujah Justicar vote is perfect, and, in the latter case, Praxis Seizure: Rome puts her in Enkil Cog range.