August 22, 2022
This series will review the new cards in the upcoming Fall of London set. Today, we'll go over the new Malkavians. 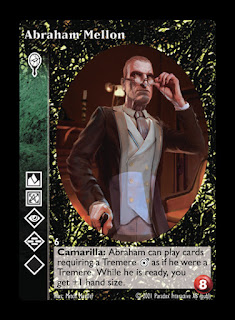 An extremely solid vampire.  This guy is going to see a lot of play.  Along with Alexander Silverson, he will be the top of the Govern-chain for G6-7 crypts.

He has all of the in-clan disciplines at superior, plus and .  He'll be able to do what Malkavians have always been able to do well: bleed at stealth and bounce bleeds.
The , however, is particularly interesting.  As Abraham has easy access to stealth, you can expect his actions to succeed, which means that he can take additional actions using Freak Drive.  He's better off using equipment or No Trace for combat situations.  I don't really see other cards getting a lot of play with him, except Daring the Dawn.  A splash copy for when you absolutely, positively need to get that action through.  Accept no substitutes.
His is also going to be useful in just a few places.  Chief among them is Magic of the Smith.  See below, where we talk about his special, but I expect Abraham to be fetching something every game.  An early Heart of Nizchetus can help avoid nasty hand-jams that plague stealth-bleed decks.  Another interesting possibility is Rutor's Hand, which would require a trip through torpor, but give him even more actions.

The Ankara Citadel, Turkey
Probably the single most useful loquipment in the game. Free Governs. Free Deflections.
Ponticulus
A great defensive ally. Helps the Malkavians in an area they need it most: rush defense. It also serves as a great blocker for bleeds because you're not always holding that bounce.
Salt of Thoth
This card is not used that much. (Only one use in the TWDA.) That being said, Malkavians don't typically run stealable or burnable locations as Tremere toolbox and wall decks do, so its use is limited. There could be a build for this and I'm interested in seeing it.
Outcast Mage
As I lamented in my New Blood: Tremere review, why does this ally still cost 3 pool? At 2 pool is roughly equivalent to Nephandus. Better in some respects; worse in others. There's probably some interesting ally bleed deck here, but not until BCP fixes the cost.

Abraham's second special is +1 hand size when ready.  In a card game with constant draws, being able to hold an extra card, being able to keep a card around for that special case, can be critical.  Many vampires have this special and they're all more useful for it.

Abraham is a great vampire.  He's got useful specials and a great discipline spread.  I expect to see him in a lot of new Malkavian decks.  His ability to multi-act sets him apart from his brethren.  He does match up quite well with Graham Gottesman, giving you a solid one-two punch for lead vampires.  He doesn't have a title, which so many group 6 clan mates have, means that he can't help with vote control or negative vote control in any way.  He also lacks , which would allow him to work with the other -Malks.  Honestly, there's probably enough of that flavor anyway.  I'd rather explore more or . 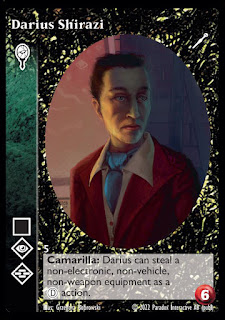 A very solid midcap for bleed decks.  He's sure to find his way into any Malkavian bleed deck, giving you more midcap options and reducing the need to double-up on midcap vampires.

Darius has all of the clan disciplines with only at inferior.  This makes him more fragile as he lacks access to combat ends.  He can always use some kind of Disguised nastiness, but mostly Darius is going to be slap-fighting in combat and taking the worst of it.  is useful for bounce, which is Dominate does, but in this case, you have light intercept if needed to block critical actions.

Currently, Darius can steal 65 pieces of equipment.  In that list are a few things that you're likely to see in a lot of games, such as the Heart of Nizchetus.  While this special isn't going to be used in every game, when it is used, it may be more useful for its ability to deny your opponent a key piece of equipment.  A Soul Gem deck without a Soul Gem isn't very useful.

Darius is a fine vampire who will find a place in any Malkavian stealth-bleed deck.  There nothing to build around with regard to his special, but it might find use in whatever game you're in.