August 16, 2022
This series will review the new cards in the upcoming Fall of London set. Today, we'll go over the new Nosferatu, revealing the remaining Nosferatu from the set. Thanks to BCP for allowing me to share these with you. 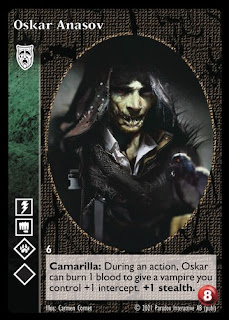 Oskar was previewed by Black Chantry during the initial round of spoilers.

For an 8-capacity vampire, Oskar has a somewhat subpar discipline spread, having and instead of .  As always will allow Oskar to succeed at whatever actions he wants and has perhaps the single best short-chain combat.
How do and fit in then?  He has no current clanmates that have (the new The Guardian below being the lone exception).  Were Oskar an Anarch, he could run a Dust Up combat package, ensuring both his survival in close combat and giving him the tools to hand out significant damage.  However, without changing sects, I fear we have little to do with these inferiors unless we pair him with The Guardian.  We'll look at that later.

Oskar has two really great specials.  First, he has +1 stealth.  Stealth gets things done; it achieves objectives.  You might be able to drop a couple of transient stealth cards with Oskar, either making the deck smaller or replacing those with payload.
His other special is very defensive.  Oskar can give away transient intercept during an action.  Animalism has a distinct lack of transient intercept.  That's the domain of Auspex.  Some of the transient pieces, like Sense the Savage Way, are really good, but have extra requirements that make them useless to most group 6 Nosferatu.  (Did you see how many 6-caps we have?). Others, like Instinctive Reaction, just suck.  While Fifth Edition gave us The Warrens, I've seen that card jam because no one is taking -actions at stealth.  So, Oskar helps fill a gap for Nosferatu defense packages.

While Oskar's discipline spread is weaker, he more than makes up for it with two solid specials.  Oskar has a place in any of the new Creeping Sabotage builds.  Allowing you to play more Sabotage's without needing as much transient stealth and allowing you to defend existing ones by passing out transient intercept.
He's most likely running an Animalism combat package, but there's some interesting thoughts in pairing him with The Guardian (see below) to make use of his and . 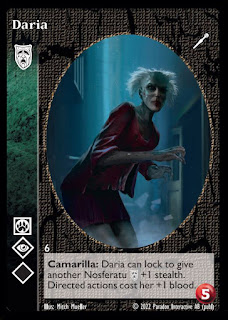 Daria feels like the odd one out at first glance: no Potence and superior Auspex?  Hmm.

As I've said many time Obfuscate gets stuff done. But she doesn't have a lot she can do.  offers very few interesting actions and weak combat support.  Her is going to let her block, but she's not going to be doing much in combat afterwards.  It does provide her the ability to bounce bleeds, something that the Nosferatu have been historically bad at doing.

Daria has both a special and a drawback to balance it.  She can lock to give any other Nosferatu +1 stealth (even from torpor).  She could give that stealth cross-table, but most likely she's there to help your vampires.  Is this a special that's going to get used a lot?  It's a clan that has built in.
She also has a drawback where -actions cost her an additional blood.  So, even though she can get a lot of stuff done with , she's not doing directed actions most of the time.  How is she going to help you win?

It might sound as if I don't like Daria, but nothing could be further from the truth.  I think she's a great vampire: The Labyrinth that can bounce.  While she's not going to be bleeding out your prey, Nosferatu have generally never won that way.  She seems well-suited to support a Creeping Sabotage deck.  She can provide extra stealth to get them into play and block using her .  She can help via pass-along offense bouncing bleeds for you.  Given her lack of combat disciplines, she probably needs a .44 Magnum or a Sniper Rifle to keep her healthy after successful blocks.
There's a large amount of and in group 5/6.  She can support larger vampires like Benjamin Rose or Baba Yaga.  In most cases, she's the support for a deck.  Added power in the blocking department.  However, I think she could be a primary vampire for a breed style deck where her stealth special might be more useful.  To me, she's a really interesting puzzle and I look forward to finding a place for her.

I don't usually comment on VTES art.  I generally like what BCP is doing.  This guy, however, is simply amazing.

Solid discipline set with all of the in-clans at superior and bonus .  That is going to be useful in several ways.  Magic of the Smith is always useful to grab needed equipment.  Another interesting (but less likely) use is Rego Motum.  Nosferatu typically have problems with hitback when in combat, so damage prevention is a useful tool.

Richard has a great special that's two-fold.  First, you can gain knowledge about your opponent's hand.  Usually your prey though bounce may have something to say about that.  An odd case for it would be to look at your predator's hand using the Night Moves action against your predator. For the second part, you can burn a blood to remove any card from that hand.  Most of these abilities are limited to particular card types, but Richard's is usable on any card.  Villein, burn it. Predator's Govern the Unaligned, burn it.  You're always gaining information and probably messing with their plans.

You're not going to find a lot of companions in clan Nosferatu that have or , just Alonso Petrodon and Baba Yaga.  To be honest, that's probably a wasted discipline point unless you're running a lot of copies of him.  He's good, but not that good.
His best use is going to be reconnaissance, but at 8-capacity he's a little expensive for that.  The Nosferatu have surprisingly few vampires with all three in-clans at superior, but is that worth the extra cost to bring him out?  If Richard were a 7-cap, I'd be much happier.
To make the most out of him, you're going to need to ensure the trains at Warsaw Station are running on time. 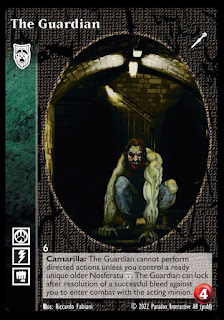 Why isn't this guy non-unique?

We're going to trade for .  This makes The Guardian more combat-oriented.  Quickness for additional strikes and combat control.  Potence to finish them off.  The isn't much use here given the special, but you'll be able to bleed with Deep Song, which you know you're going to be running.

Let's start with the drawback.  The inability to perform directed actions is limiting, but the requirement to allow them is not strenuous at all.  Have you seen how many 5- and 6-cap Nosferatu there are?  Even so, you can use Kindred Intelligence or Creeping Sabotage without fear, making The Guardian a fine initial vampire.
His special is quite interesting.  It can be ordered with Touch of Pain, making it possible to soften up a vampire prior to entering combat or to finish one off after the combat.  Still, the bleed has to be successful, which is a problem.  A Yawp Court effect would have been interesting, but, I imagine, more costly.

I really would have loved to have an Oskar and The Guardians deck because it sounds like a cool band name, but with each vampire being unique there's not a lot of Nosferatu to work with.  I think some Celerity cards are a good addition to the traditional Nosferatu Potence package, but with so few vampires to fill out the crypt you're going to be mixing these guys with the Brujah?
Speaking of Brujah, maybe Anarchy is the way to go.  You'd get a lot of play with Anarch-threeways and generally have a much more interesting vampire to mix together.  There are some Gangrel with or any of the Brujah Anarchs.
As for his ability to deter bleeds, it's a lock effect, so you can only mess with one bleeder per turn.  I don't really see that keeping any deck at bay.  It's a special that you probably won't use if you want to take actions with him, but those are likely to be blocked given The Guardian's lack of Obfuscate.
I just can't bring myself to find a place for this vampire.  If we could have seen some non-unique version of this vampire, I think we could have come up with a few interesting concepts.  As it is, this one's sitting in the deck box until we get some more crypt cards to work with.