August 24, 2022
This series will review the new cards in the upcoming Fall of London set. Today, we'll go over the new Toreador, revealing all of them. Thanks to BCP for allowing me to share these with you. 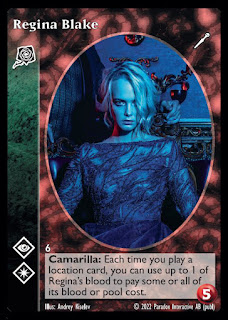 First, thing she has no Celerity whatsoever.  I'm not sure that's problematic.  Toreador only really care about Celerity for Resist Earth's Grasp stealth or if they're a gun-combat deck.  More for group 6 Toreador, which has been seriously lacking.  More for the group, which seems highly focused on it already.

This could be an interesting special to build around.  There are a lot of locations that cost pool whose cost can be defrayed with her special.  She's Toreador so the Art Museum is an obvious choice to have in decks with her.  Creepshow Casino is another popular choice for Toreador decks.  Given her , any of the media locations are also good choices.

Regina is an excellent vampire to slot into Toreador vote decks.  She can push votes and use Voter Captivation at superior to gain blood and give you pool.  She offers more bounce support in a grouping that has not had much .  Nothing earth-shattering her, but she'll find a place in just about any of the Catalina Vega decks.
Given her lack of Celerity, she's not the best choice for blocking decks.  She offers no combat control, but if a .44 Magnum or Sniper Rifle can keep your meta at bay, then she's an excellent addition to that package.  Her special is more likely to have an effect in blockier decks that want to use permanents to gain the upper hand.  There's possibly some interesting overlap with Matthew and locations.  Perhaps a blocking deck featuring a lot of media outlets?  Being able to pass out intercept so you don't have to block yourself is also useful. 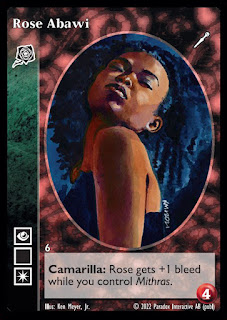 Is this a Minister I see before me?  Rose is an interesting vampire for the Toreador.  With she has the ability to bypass the typical Toreador problem of being unable to generate stealth.  She can vote and push it with , but stealth-bleeding is also a thing.  The is fine, but you want in a 4-cap for weenie Auspex.  At best she's going to chump-block an important action using Auspex bounce at inferior.

A very conditional special that will never arise.  While this provides nice flavor for the game, Rose has so little in common with Mithras that you're never going to take advantage of the extra bleed.  Better than nothing I guess.

She doesn't have a lot of fellow Toreador who share to really make a clan-based deck, so you're most likely looking to mix her with other clans.
The Ministry and the upcoming Ravnos both have .  We know the Ministry is Anarch now and I'm unsure where the Ravnos will land.  The pre-V5 Ministry are also workable, being mostly Independent with a few Sabbat in the relevant groupings.  She could easily be a support vampire for any stealth-bleed or stealth-vote decks in that grouping.  Her access to complimentary sect cards is the drawback.
Going Anarch is easy enough though balancing making Anarchs with having native Anarchs can be problematic.  I find Twilight Camp is always useful for mixed cases and The Red Question is a burn-option that can feed Powerbase: Los Angelese.  She's too small to do much useful with the Anarch sect toys, however.  She needs to be a 5-cap to use Fee Stakes or Reckless Agitation.
So, I expect we'll see her mostly bleeding at stealth.  Here's she's unlikely to roll with the new Ministers who will want to play Platinum Protocol.  There's use for her in non-Baali unnamed decks.
I'll be interested to see where she pops up first in the TWDA.  I like her just not in Toreador deck designs.