September 13, 2022
This series will review the new cards in the upcoming Fall of London set. Today, we'll go over the new Banu Haqim. 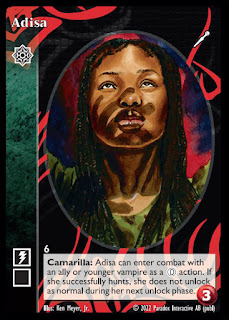 You could say I like small vampires with Obfuscate and it's true.  They can get stuff done.  Adisa can do a lot of interesting things.  Let's take a look.

As a 3-cap, Adisa has only two inferior disciplines.  In my opinion, she has the best two of the Banu Haqim's clan disciplines (at least at inferior).  As I mentioned, she can get things done with .  It's always good to have little guys that can do stuff for you.  Her allows you to manage combat and with the change to Quickness, she can do some good work in combat.  Concealed or Disguised weapons are the most logical choice for her.

We all know that the current meta is ally heavy (and Fall of London may exacerbate that).  Adisa, hunter of Legionnaires.  This is a special that will get a workout in most games, if you want it to.  You don't even need much support.  A .44 Magnum and Adisa might be the best 5 pool you can spend if you're ally hunting.  She can also target weenies, putting a hurt on various breed archetypes.  While it's better to prevent the progeny from coming into play, rushing them down is the next best thing.
That's a very solid package for a 3-cap vampire, so Adisa has a drawback as well.  Not being able to unlock on a turn following a hunt really isn't that brutal of a drawback.  You can work around it with Taste of Vitae in your combat package, a hunting ground, of just a simple Blood Doll.  It does mean that Adisa will not be farming pool for you, but she's got more important things to do.

I really love Adisa for a variety of reasons.  While you'll probably not want more than one copy in most decks that extra copy you get in the Fall of London set is going to find use in that other deck.  In fact, I'll probably be looking to put 4+ copies of her in decks because I love those small vampires.
While Adisa is nothing to build around, she's not your star.  She'll find a spot in many decks.  I wish all support vampires were this good.