November 06, 2022
This series will review the new cards in the upcoming Fall of London set. Today, we'll go over the new Gangrel. 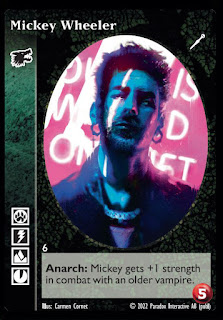 Let's take a look at Fall of London's lone Anarch.

All of the in-clans at inferior plus .  Mickey's will allow him free multi-action with Forced March and some combat control with any of the Celerity combat cards.

About 58% of the vampires are older than Mickey, so his additional strength is going to see frequent use.  It is, however, a special that gets worse the older Mickey gets, which means that discipline cards make him both better (for gaining a discipline level) and worse (for reducing the number of vampires it affects).  Gaining a single capacity drops the amount of affected vampires to 43% and making him a 7-cap drops that to 30%.  As much as you might want to "improve" Mickey, don't do it if you want to take advantage of his special.

He's designed for combat and multi-acting.
He'll find a home in any of the Anarch Gangrel Highlander crypt designs, which focus on getting out as many different Gangrel as possible and overwhelming their prey.  That group 6 design needs cheaper vampires, so Mickey might be too expensive for that in general, but his combat special may be a useful addition.
Mickey is a solid compatriot for Casey Snider and there is quite a few Anarchs to make a rather strong Diversion-based deck. 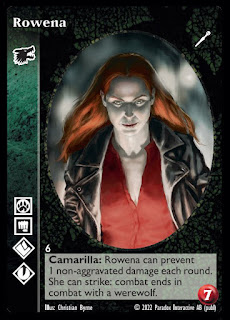 An odd one out, being the only group 6 Camarilla Gangrel.

Rowena's and will ensure that she's able to get stuff done and multi-act even if blocked.  Inferior Animalism means that she's not using the typical Crows/Bats combat.  On the other hand she has , which gives her access to Immortal Grapple, ensuring the any agg-poke hits home.

Rowena has two combat specials.  First, she can end combat against a werewolf.  Given that she's setup to be in combat, this is a useful escape clause if you get stuck fighting a werewolf and are unprepared.  Ideally, she would just kill the werewolf, but this is VTES, things are never ideal.
She can also prevent 1 non-aggravated damage each round.  This is a great prevention special.  No other vampire can prevent so much damage.  Rowena will still need some help against app-poke hitback, but in a normal combat, you're coming out on top.

Rowena is definitely alone, being the only Camarilla Gangrel in group 6.  So, you're not going to be adding her to decks that want to focus on Anarch sect tricks.  With though she can do a lot of heavy lifting in a Force of Will bleed deck, but she's probably a little too large to that and it makes little use of her excellent specials.
Rowena wants to be in combat.  Trap seems particularly useful with the occasional Immortal Grapple to "stick the landing."