In our previous post, Understanding Basic Crypt Construction, is a simple intro to crypt constructions.  This post will go deeper and get a little mathy as we talk about more complex crypt builds.

Of course, we can take the complete opposite of approach from the "Highlinder" crypt design and build a single vampire crypt.  Quite simply, if every copy of every card in your crypt is the same, then you will always succeed in drawing it.  Such decks typically feature the Soul Gem of Etrius and involve burning your own vampire to get another fresh copy of the same vampire.  Most of these fall into the "turbo" design that attempt take one really long turn that ousts everyone.  Arika, Nergal or some other powerful vampire usually stars in this deck design.  These decks are also quite fragile.  There is no backup plan.
Of course, most decks want to get more than one vampire into play.  The goal of crypt construction is about reducing the randomness of the draws to ensure reliable draws, while offering yourself options.  The best crypt constructions balance reliability and variety.

First, you want to have a very small pool to choose from.  The smaller, the better.  Let's take a crypt of 12 vampires with 4 copies of a single vampire.  The chance of getting at least one copy in your opening hand is 85.9%.  However, if you double that to 8 vampires in 24, your chance of getting at least one copy decreases to 82.9%.  This may seem counterintuitive, but your initial draw count is fixed meaning that more cards mean more possible draws that don't pick the target crypt card.  We're going to suggest keeping your crypts to 12 or 13 vampires.  In a bit, we'll discuss why using 13 may be beneficial.

Second, we need to consider the odds of getting the cards we want.  Unless we have enough copies to guarantee that we draw the vampire we want, there's always a chance that we're not going to get it.  This is mostly about risk.  What is your risk threshold?  Are you willing to have a bad game (not drawing the right vampires) one in three times?  That doesn't feel good enough to me.  Personally, I think one bad game in ten is acceptable.  Perhaps, your threshold is higher (or lower).  We'll cover a variety of draw odds below.

Opposing reliable draws is our need to have draw variety.  We're best off if we can get a single copy of the desired (star) vampire and three support vampires to go with it.  Attempts to give a varied opening crypt draw will always be detrimental to getting reliable draws.  What we need to do is balance the two opposing forces.

Let's take a look at a couple of graphs.  That will help us understand these numbers without putting painful tables in this blog.

First, here are the odds of getting at least one copy of the desired card based on how many copies you have in the crypt.  The data uses both 12 and 13 card crypts for analysis. 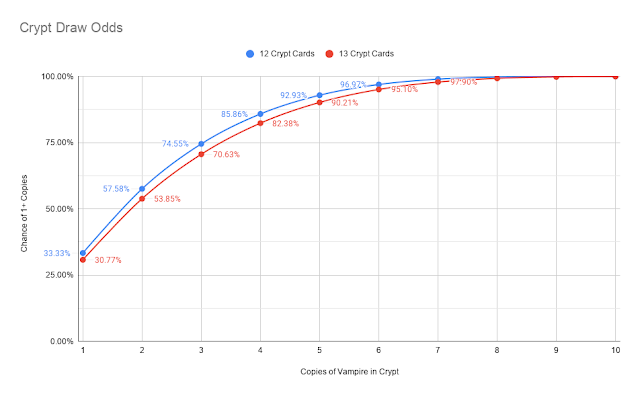 Second, this graph shows the odds of getting a "good" crypt draw with only one or two copies of the desired card.  Again, the data shows odds for 12 and 13 card crypts. 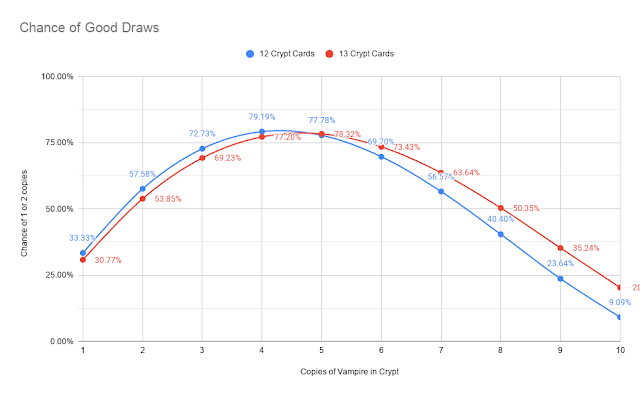 The interesting thing about getting good draws is that there's a clear tipping point.  Too few cards and the odds aren't good enough; too many cards and the odds aren't good enough.  The good news, however, is that there is overlap between the two curves.  If we match them up we can determine that 4-6 copies works well in terms of getting our target vampire, but not getting too many of our target vampire.

Going with 5 copies in a 13 cards crypt gives you a 90.21% chance of getting your star and still have the highest odds of coming away with only one or two copies in your opening crypt at 78.32%.  Roughly speaking in 1 in every 10 games will lack the star, 1 in 10 games will have too many copies in the opening crypt to give you desired variability, and the remaining 8 games in 10 should be good games with nice opening crypts.

This is the crypt build that we recommend using when building such star decks.  The TWDA contains many examples of such crypts.  Let's take a look at a few of them now.

In each case, you can see how the deck is designed around one vampire with the support vampires being mostly interchangeable.  You'll notice how the Anson deck increases the reliability around having a second Prince by ensuring that there are 4 non-Anson Princes in the deck.  This showcases a nice approach to making the variables more reliable too.

This crypt is not restricted for use with Anarch Convert, but this is a typical build for Anarchs.  The advantage are slightly higher chance of getting at least one copy.  However, that extra percentage is weighted toward the bad draws (3 or 4 copies).  It slightly underperforms The Star Crypt in good draws (by 0.54%), but is weighted more heavily toward having two copies in the opening crypt.

This optimizes the crypt for an opening draw weighted toward 2 Anarch Converts and 2 other vampires, giving you the ability to make two non-Anarch vampires Anarch with your opening draw.  Let's see a few examples from the TWDA.

Each deck has actions and cards that are useful before the vampires become Anarch, but the real power in either deck comes from using Anarch cards.  As I stated in the preamble, the 5/12 crypt is optimize for getting 2 copies of the star (Anarch Convert) and if preferable to 5/13 crypts, which are optimize for getting a single copy of the star.

Obviously, I given you some suggestions for when you use different crypt structures, but my recommendations are based on my level of comfort with the odds.  If you don't think 90% chance of getting a star vampire is good enough, then you'll need to evaluate the odds and adjust.  In either case, I think that 13 is the better crypt size for star decks with multiple copies, unless that star is Anarch Convert, where you need to make Anarchs as fast as possible.

We'll discuss ways to mitigate bad crypt draws in both the deck and the crypt.